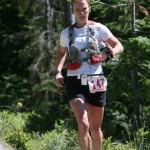 The new year is here and with that comes New Year’s resolutions. Unless things have changed,I would say that weight loss is at the top of many lists. When deciding how to go about this endeavor most people know that eating better coupled with exercise is the sensible and lasting approach.

In addition to diet, cardiovascular exercise is typically how most people attempt to lose weight.  You hit the gym to get on the elliptical, exercise bike, treadmill or perhaps you start running.  A few months later, if you have managed to get past two weeks, and you are lucky, you may have dropped five pounds. Determined, you figure that you probably just need to do more. So now you are doing cardio five times a week for one hour a day. A month later you are only down that initial five pounds and in fact, it seems the scale is heading upward a little. Do more cardio, right? I’d say no. And here is why.

Before I begin, I realize that I’m talking to a bunch of people who regularly crank out 20 miles on the weekend and 80+ miles a week is commonplace. Been there done that. At one point in time my total running hours for the week topped out at 16 hours. I’m not going to try and persuade you to cut back, but I am going to shed some light on the misguided attempt of using running as a
weight loss tool.

I think we can all agree that exercise it good for us and I would even argue, necessary. When we run we increase our lung capacity our endurance and sometimes it can save marriages … But long slow miles will not make you stronger, more flexible, agile, leaner or faster. In fact, you are detraining yourself in those categories. There are multiple studies that prove that resistance training, not chronic cardio, has a much stronger impact in overall health and that relentless cardio decreases muscle mass.  Ever see those skinny­ fat people? You know, the person who managed to be successful in using cardio for weight loss. However, all they did was turn into a smaller version of their former self. If the number on the scale is all you care about, perhaps that
is success to you, but I would say for longevity and healthy aging, strength, in the form of lean mass/muscle is desirable and what you need as you age, woman particularly.

When we exercise we are putting stress on the body. A sound training plan that includes appropriate recovery, diet and rest, leads to increased fitness. This is good and what we want.

Over do it and you get burnt out. Not good. To get to the heart of this heart article.  Running too much is typically an ineffective way to drop weight, especially those last few stubborn pounds and this is due to hormones and no, not sex hormones, though those do play a role. The three that I’m going to talk about are: insulin, cortisol and leptin.

Insulin ­­ is known for controlling blood sugar. When you eat, insulin is released to help shuttle nutrients into cells, and for the sake of this article, sugar (glucose), so it can be stored as glycogen or body fat. Once your glycogen stores are full your body will store excess sugar as body fat.

Cortisol ­­ Also known as the stress hormone, (it has a lot of other very important roles) is responsible for triggering the release of sugar from the liver. When everything is in a happy balance this is good thing. However, in times of increased stress, too much cortisol gets released and in turn, too much sugar gets released from the liver. Remember the role of insulin?

The body detects increased blood sugar and insulin is released to shuttle the sugar to other cells. The body is essentially in a low grade fight or flight mode. Stress is stress … And the cycle continues. In the very summarized story, if your cells are already at their sugar max they cannot take in any more sugar, so it gets stored as body fat. And the severe side effect of too much cortisol stimulating insulin release, is insulin resistance and type II diabetes. Both of which are not good. As a side note, cortisol is a major player in the sleep cycle. Ever suffer from insomnia during times of increased mileage or stress? It’s due to the disruption of the cortisol cycle.

Leptin‘s job is to tell you that you are full. However, recently it has been well known that insulin and leptin are partners and when one goes haywire the other follows. So what does that mean?

The body becomes unable to detect that you have eaten enough.  So then you are at risk for increased body fat storage because you overeat due to your hunger signals malfunctioning.

What is the answer? If you want to continue to train at your current level and fat loss is a goal of yours keep in mind that you can’t outsmart the body. And restricting food certainly is not a good idea. Eating better, perhaps working with a sports nutritionist or health care provider would be a good place to begin (my suggestions are: naturopath, ATC, sports chiropractor). Hormones play a huge role in how our body functions, looks and feels, so they really need to be considered and what we put in our mouths directly impacts hormones.

The genetically superior runners out there who are lean are that way because they got dealt a better set of genes. Sorry, no way around that, but you can optimize your own genetic make­up by reassessing your approach to fat loss.

As with all things in life there is a balance that needs to be found. We all operate a little differently so what works for Joe or Sue will not necessarily work for you. 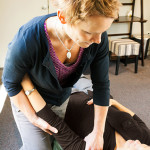 Megan Zetter, D.C. is a chiropractic physician with  UltraChiropractic&Rehab